Golden Monkey Tracking is yet another absolute highlight and so rich in experience, the golden monkey species belong to the ole world monkeys that reside in the Virunga volcanic region of East and Central Africa, the Golden Monkey belongs to the family with botanical name (Cercopithecus Kandit). In Rwanda, the Golden monkeys specifically occupy the North-western part in Volcanoes National park, while in Uganda; they occupy the south west in Mgahinga National park. In deed one can agree that it’s restrained to boundaries of highland forests, it is also significant to note that the Golden monkey is red-marked on the “list of seriously endangered species. 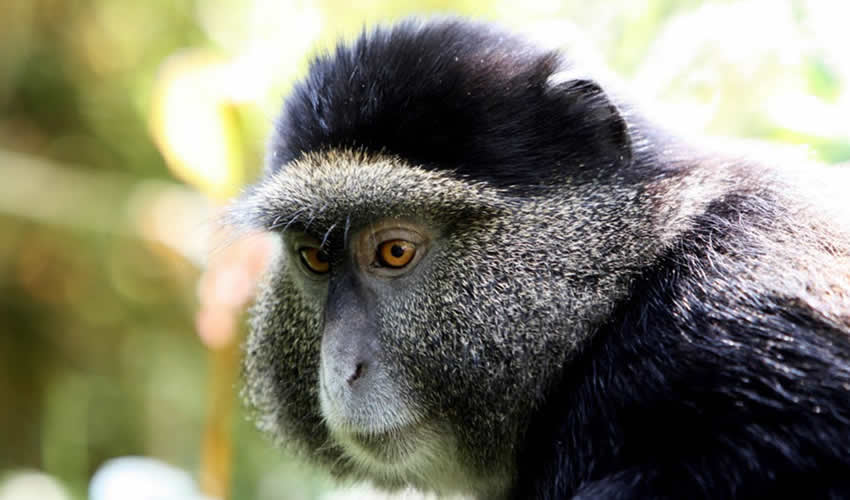 Golden monkey tracking is one of the most extraordinary and exceptional tourism activities that draw thousands of visitors from all corners of the world to Volcanoes National Park. This striking activity leaves a total contentment in the hearts of the participants because they get an opportunity to trek and hike through this body refreshing mountain and meet face to face with these rare and endangered primates.

A golden monkey permit costs $100 per trekker which can be acquired at the park headquarters in advance or on the morning of the activity (because there is no limit on the number of people to trek them per day) but to allow your proper and advance planning, you can book for it some days prior to tracking. This cost includes park entry fees, tour guide fee and the actual activity but does not include the cost of hiring a porter to carry your luggage during this astonishing activity. In case of the need for porters, they can be hired from the park entry.

Unlike gorilla trekking, there is no limit on the number of tourists to participate in this activity, no minimum distance with these primates and age limit is 12 years though not so stringent as in gorilla trekking. They can easily be found (within about 30-60 minutes) since they usually inhabit the foothills of the mountains in the bamboo forest. One of the hints of locating them is by following the leftovers of freshly eaten bamboo shoots. Once they are found, visitors are allowed only one hour of a magical encounter with these extremely alluring primates to observe their behavior or take photographs. They occasionally go into gardens of surrounding villages to eat Irish potatoes that have been left after harvest. What is so astonishing about watching these primates is their behavior of digging and hastily cleaning sweet potatoes before eating it.

In conclusion therefore, golden monkeys among the two countries are rare species still surviving in the wild. Travelers should therefore take time to interact and spend with the rare species for a phenomenal and extra ordinary experience where you should not forget to add golden monkey trekking in your package and enjoy your time to trek and learn about these remarkable creatures that will leave beautiful memories in your mind.

There is one golden monkey family that has been habituated in Mgahinga and is opened to the travelers for trekking. There are approximately 3000-4000 golden monkeys in the higher altitudes of the Virunga conservation area of which Mgahinga gorilla national park is part. Golden monkey trek is usually better in the mornings and visitors are granted chance to last with the monkeys for about an hour where a golden monkey permit in Uganda costs USD 50 per person.

Unlike the mountain gorillas, golden monkeys live in big numbers in that a group has a range of 60 – 80 members or above. This ensures travelers higher opportunities of seeing the golden monkeys as they feed, play and do different roles in the family.

They leave their sleeping areas and wonder in the forest searching for food after which they return to sleep. Golden monkeys sleep up in the bamboo trees in groups of four or more individuals. A trekking permit is a must have for everybody taking part in the activity. The permit is accessed from the national park head offices in Kisoro district or at the starting point (Ntebeko village). A permit is sold at USD50 and allows travelers to interact with the golden monkeys for about an hour maximum, which is quite to travelers.

Concerning the number of people, a maximum of eight people allowed in trekking the mountain gorillas. The best time to trek the golden monkeys is in the morning and evening hours.

© 2022 Gorilla Adventure Tours. All Rights Reserved. Designed by NedcorpUG
Back To Top
×