Bisate Lodge is an upmarket facility adjacent to Volcanoes National Park home to the famous mountain gorillas protecting the Rwandan portion of the Virunga mountains, a conservation area that includes protected areas of Uganda and the democratic republic of Congo it includes Rwanda’s highest point mount karisimbi and two active volcanoes Nyirangongo and Nyamuragira , the safari lodge is owned by wilderness safaris placed on 27 acres of land on a hill side close to northern Rwanda formally a farm land. 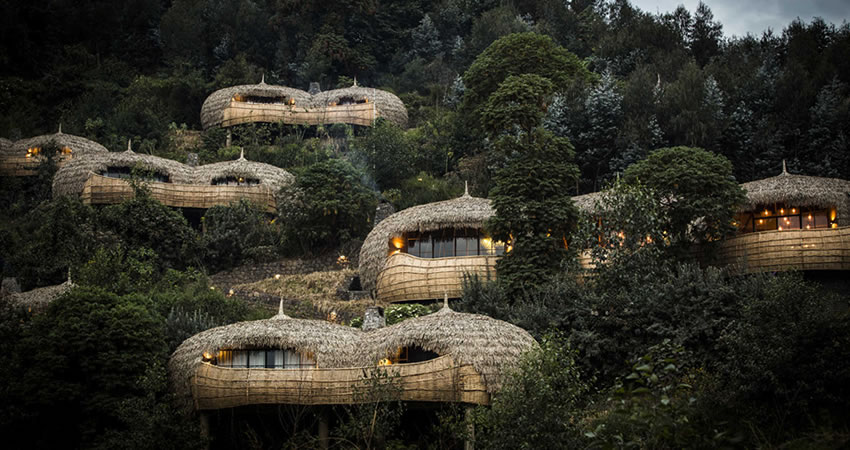 The lodge was opened in 2017 to facilitate travelers that come to trek mountain gorillas in the national park, golden monkeys and sight out over 165 species of birds 17 of which are endemic such as red-bellied fire finch, cinnamon-chested bee eater, dusky fly catcher, chubbs cist cola among other species of birds. The lodge is a natural grand stand of an eroded volcanic cone with its outstanding views of the highest points of Rwanda’s portion of the Virunga mountains Bisoke and Karisimbi out casting through the forest.

The main lodge is built in thatch style with three large nests, a restaurant on one side, a lounge bar on the other and a reception in the center, the restaurant has an outdoor and indoor seating offering the best of Rwandan and international cuisines. The lodge contains six cottages that offer maximum comfort and views adhering to the environment built with a large culture of rural Rwanda, the synthetic thatched structure ofa weathering volcano inspires and blends the land of a thousand hills. Each of the villas contains a bed room, reception space, en-suite bathroom with a central fire place, the camp can accommodate 12 guests and 4 guides, it was built using local material such as wood and volcanic stone, the interiors decorated in warm grey with an outstanding vibrant green.

Bisate Lodge works closely with the local community to ensure that it benefits profit of the lodge they are joined together by the tuzamurana co-operative community project; it participates on the indigenous re-afforestation which brings life to the old species   of volcanoes that are rare to community but were ounce there.

The main reason of visit is to trek the mountain gorillas, the lodge has the easiest and nearest distance to the park headquarters to track the mountain gorillas, it takes less or more hours depending on how far the gorilla families have moved into the forest, there are whilst other activities like tracking troops of golden monkeys, nature walks, visiting the local community who have different performance for the clients on their traditional folks, dances and norms. It is also possible to hike up to Dian Fossey’s grave at her former research station at karisoke.

Bisate Lodge is accessible all year round however the best time to visit is during the dry season the long one of June to mid-September and December to February, it is advisable to carry boots, insect repellants, water proof covers for phones and cameras in cases of rain long sleeved shirts and trousers during the hikes.