Boat Cruise Tours can also be referred to as boat trips or launch cruises.  Boat cruises are fast becoming a top tourist activity in Uganda because on top of the usual sight seeing on any trip, cruises also offer snacks, beverages and entertainment which makes it a wholesome experience. Uganda has several boat cruise tours but the main ones are along Lake Victoria, Lake Edward, Lake George, Kazinga Channel and the River Nile among others. 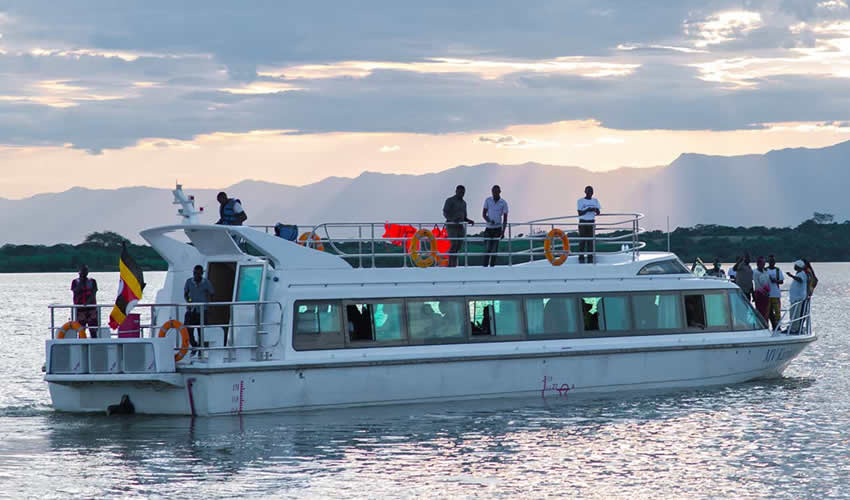 Kazinga Channel Launch trips are mostly organised for tourists to the Queen Elizabeth National Park in the South Western part of the country.This Channel is Forty Kilometers (40Km) long and connects Lakes Edward and George.

Cruises along Kazinga Channel usually take approximately two  to five hours (2 – 5 hrs) which gives tourists enough time to explore the water and the abundant wildlife along the shores of the said Channel. Such cruises are also ideal for taking pictures since the boat drifts slowly by the shores of the Channel.

There are experienced tour guides on such cruises who ensure that tourists are furnished with all the relevant information pertaining to the viewed wildlife and also answer questions concerning the trip.

Kazinga Channel is home to the biggest number of hippopotami on the African Continent. During a day cruise, hippos can be seen bouncing their bodies in the water to safeguard their sensitive skin.

While on a Launch Cruise along the Kazinga Channel, one is assured of seeing several bird species including the African Spoonbills, African Skimmers, Cormorants, Martial Eagles, Pelicans, Papyrus Gonoleks and the elusive Shoebill Stork. Other wildlife that can be seen along the shores of Kazinga Channel include crocodiles, elephants, buffaloes, Uganda Kobs and waterbucks among others.

The Ssese Islands consist of eight four (84) islands in the North Western part of Lake Victoria in Uganda.While on a cruise to the Ssese islands, tourists are treated to incredible sights and sounds in form of tropical rainforests, several bird species, chimpanzees, and monkeys among others. These trips are also characterized by snack foods, beverages and entertainment, making them wholesome.

While on the islands, one can opt to camp or stay in the more organised accommodation in form of hotels and guest houses. There are also long sandy beaches which favour sun bathing. One can also embark on a village walk to learn the ways and cultures of the local people.

Lake Victoria Sunset cruises are conducted in Lake Victoria, the third largest fresh water lake in the world.These cruises usually begin from Entebbe as tourists head out by boat towards the Equator line or local islands to view the sun set over the horizon. Tourists on this cruise can also expect to see several bird and primate species along the shores of Lake Victoria as well as enjoy the snacks, beverages and entertainment provided on the boat.

Boat cruises offer tourists with a wholesome relaxing experience because on top of the usual wildlife sights and sounds, tourists are also treated to tasty snacks, beverages and entertainment as they enjoy the cool breeze from the water bodies.